5 Interesting Customer Stories You Should Check Out

Recently we had 5 customers come to us, each with unique items and special instructions on what they wanted. We were more than happy to oblige; we love it when customers use our services in creative ways to achieve the results they want! Read more to check out what they did with their jewelry. 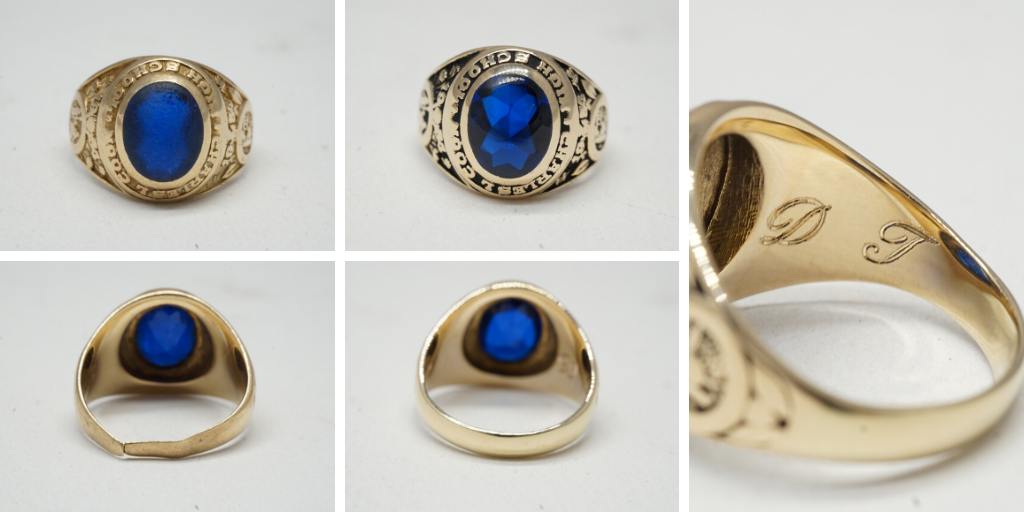 The ring, before and after restoration.

Our client did a complete overhaul on her mom's class ring to get it ready as a Christmas present! The ring was badly damaged at the back due to an overly thin shank, which caused it to crumple after decades of wear. Not only did we fix the issue by replacing it with a thicker half-shank, we also polished the worn-down stone and reapplied black enameling to make the side details pop, in classic class ring style. We removed the original engraving, which had been partially worn away, and re-engraved the initials with our laser script font. 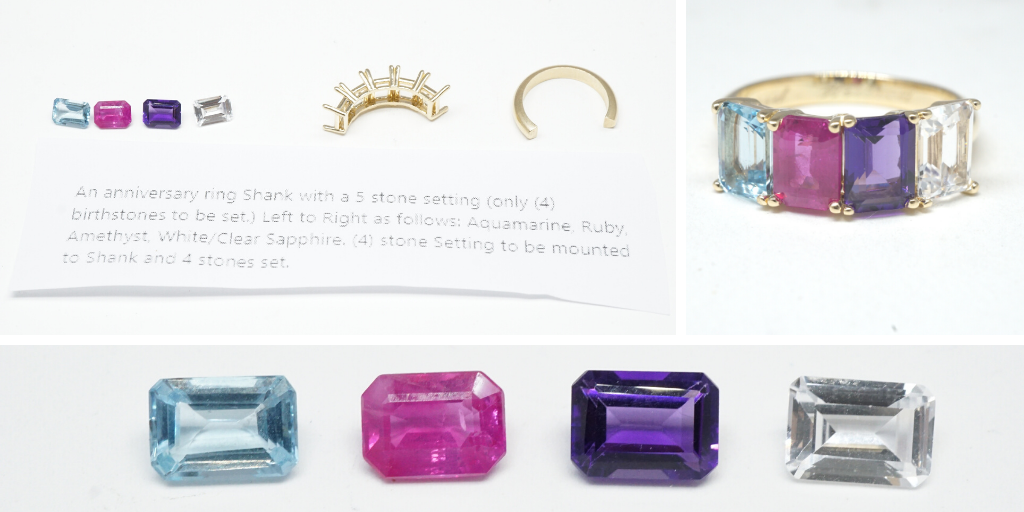 The components with instructions and the ring after assembly

A long-time client of ours had a specific idea in mind when it came to designing his mother's anniversary ring. He purchased a five-stone setting, a thick shank, and four stones, and handed the materials over to us to assemble into his dream ring. We cut off the excess setting, as he only needed to set four stones instead of five, and soldered the shank to the setting. Then we sized the ring, and set the stones. As a finishing touch, we engraved a personal inscription on the interior of the ring in script before sending it back to him. 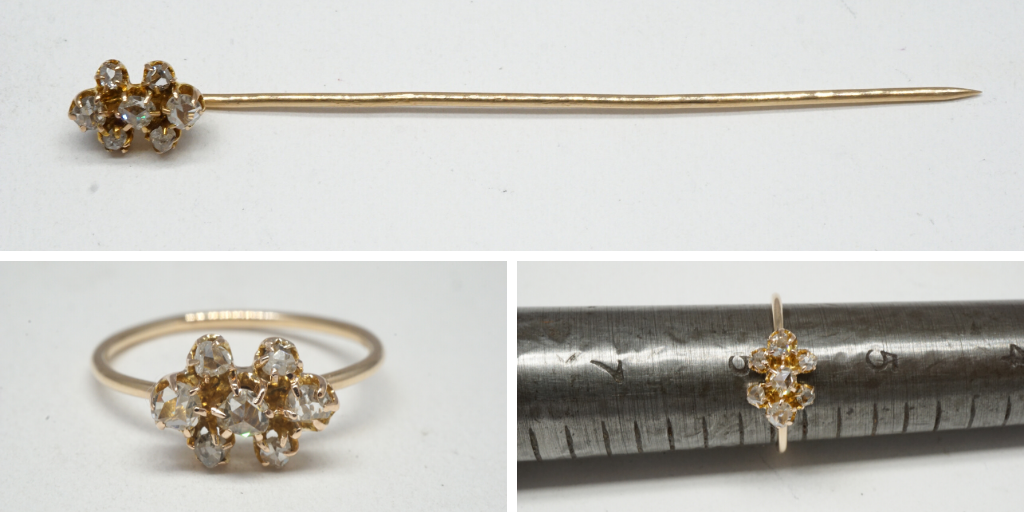 The stickpin and the converted ring. Note that it was sized to a six.

This customer had a lovely antique diamond stickpin that she wanted to convert into a ring. She sent in the stickpin, and, we used the existing “stick” portion of the pin to shape it into a band for the ring. The piece was then polished off, and all of the diamonds were checked and tightened for extra security. 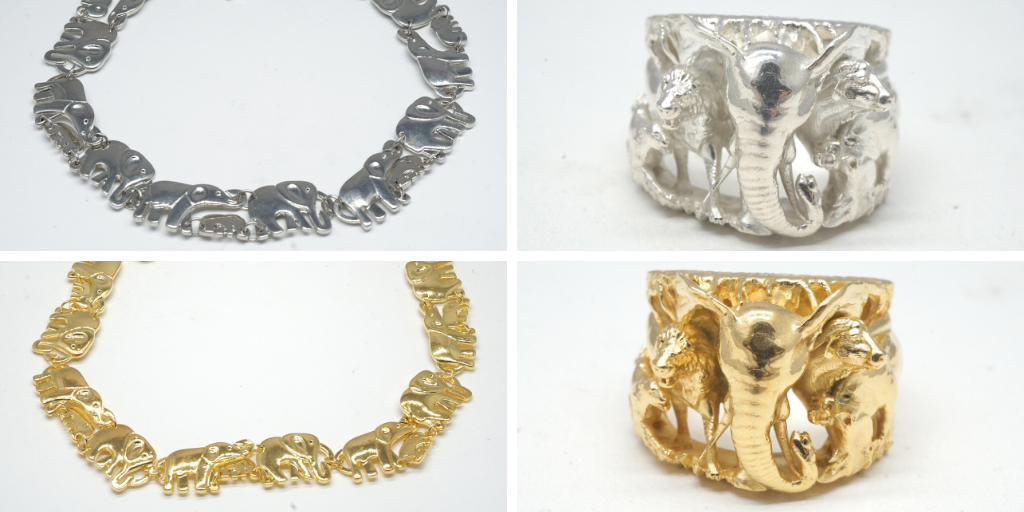 An elephant necklace and ring before and after gold plating.

Our client loves elephants…so much that he has a collection of them! The first piece we worked on was a magnificent elephant necklace. He wanted us to gold plate the piece, which proved to be slightly tricky as the metal was an unknown commercial alloy. Fortunately, we were able to plate on top of it, and it came out beautifully.

The second piece he wanted us to gold plate was a stunning sterling silver ring that he had bought from Italy. He needed it in time for his birthday, so this piece was a rush order. Even so, it took to the plating wonderfully and the ring was ready well before his birthday party. 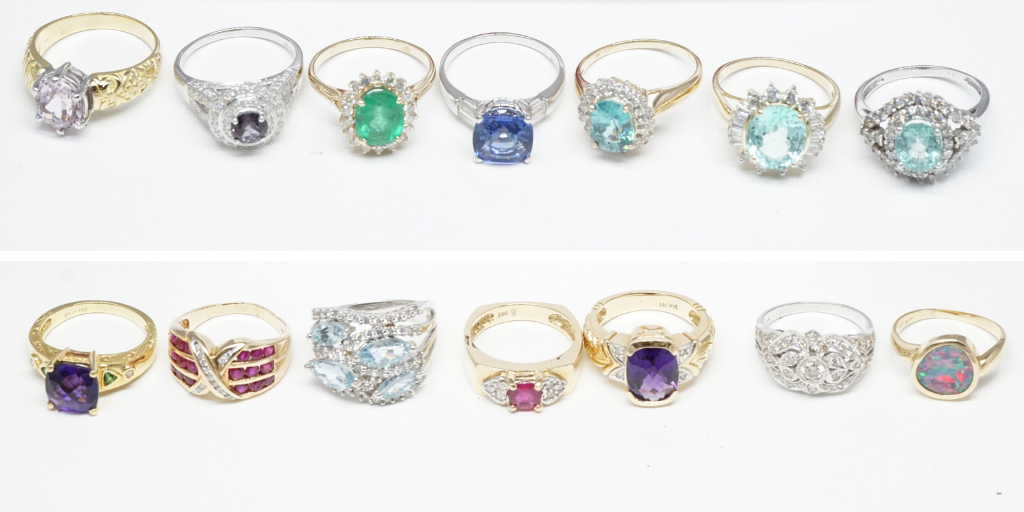 An assortment of beautiful colored gemstone rings for ring resizing.

This particular client has a love for expensive, high-quality rings. She sent in two large batches of rings for resizing. Both sets were worked on very carefully as the pieces contained colored gemstones such as emeralds and aquamarines. These stones contained large fractures that could be affected by the sizing process, but our skillful jewelers unset the stones and reset them in order to size the rings properly.

Hopefully we've got you started on thinking about what you can do with your precious pieces! We're looking forward to seeing what you'll send in with our Black Friday discount; comment below if you have some ideas!

My daughter needs a bracelet gold plated because it’s terribly scratched and I want to do it for a Christmas present. It’s a fake Cartier, but she doesn’t know that. It’s a good fake

I sent my wife’s ring to you guys, it came back all shiny and new. the little diamond in the middle fell out of the setting.
Bummer… It’s in India swept up into someone’s rubbish. Can you guys find a simple diamond and set it in so it won’t go away after cleaning?

Hi Tim, we’ve responded to you via email. 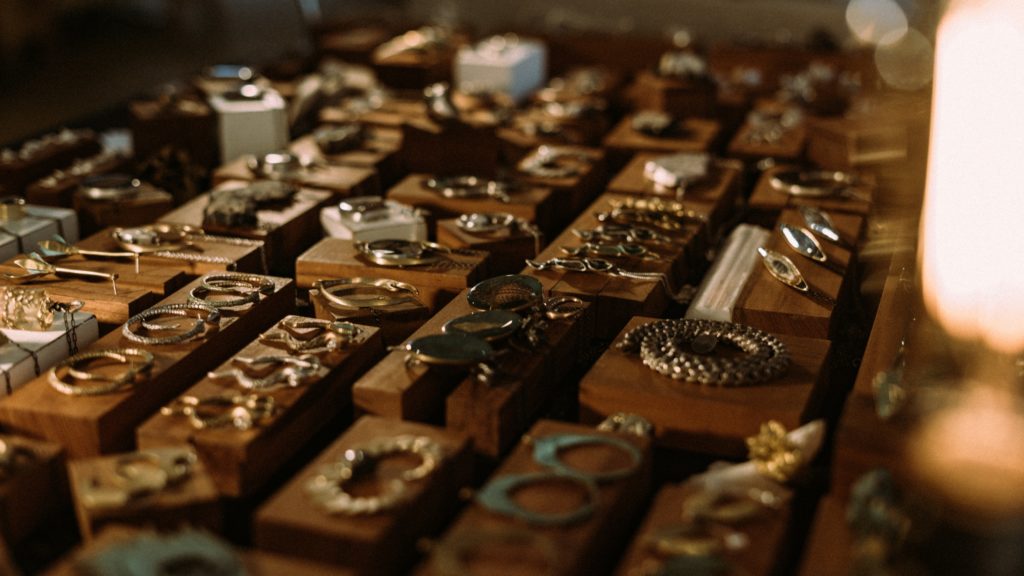 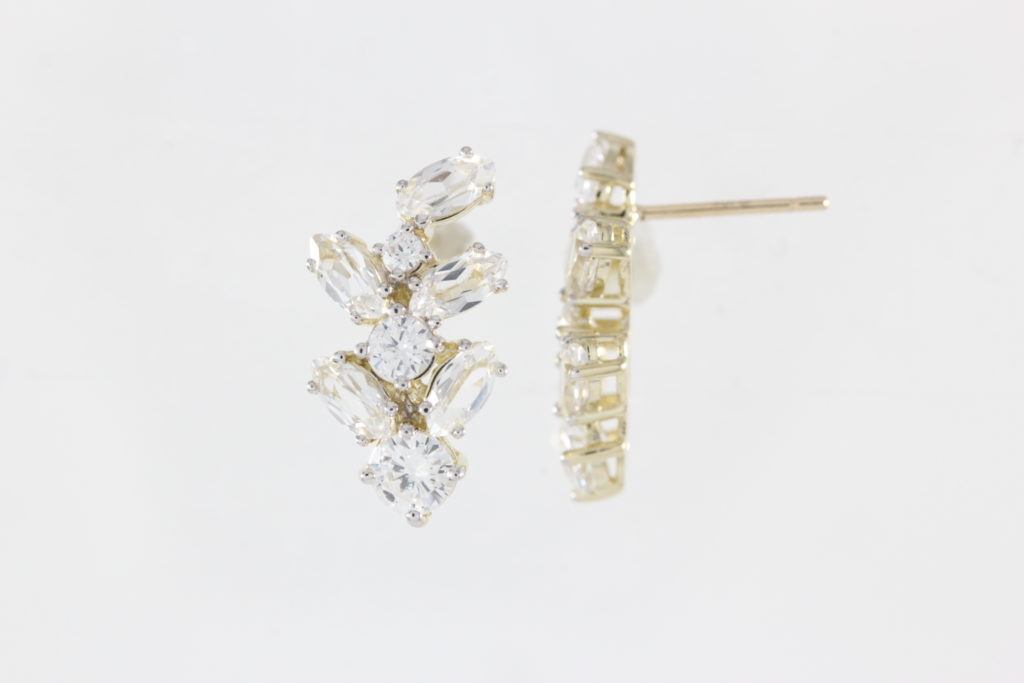 5 Reasons Why Your Jeweler Can’t Replicate Your Earring

You've lost an earring, and you're looking to get an earring replication. Much to… 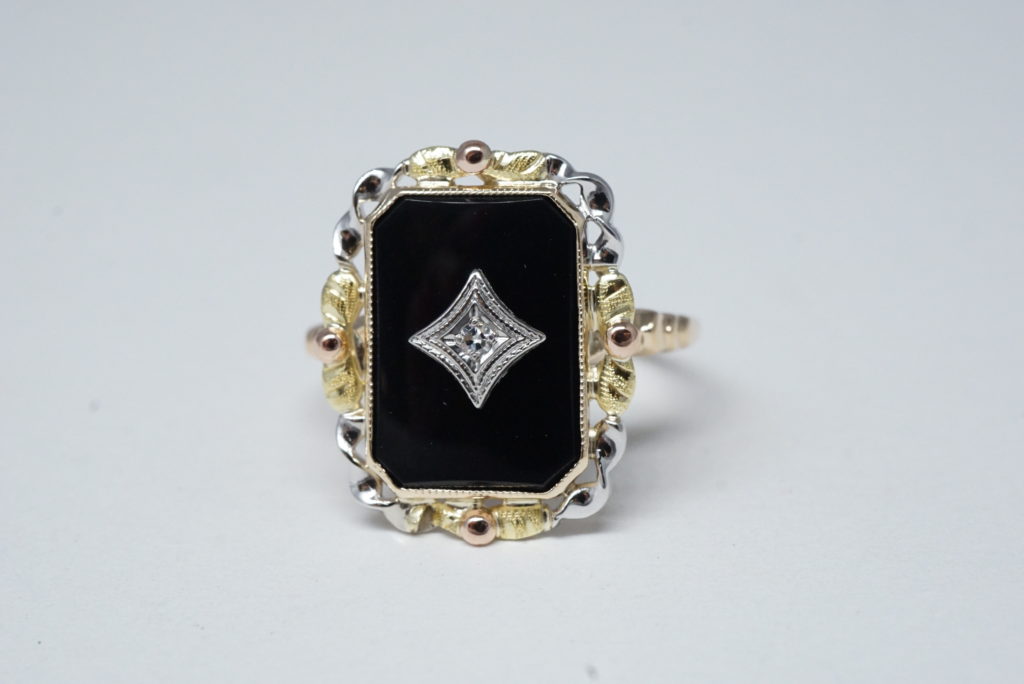 How to Identify Mourning and Memento Mori Jewelry

As part of our month-long Halloween celebration, we'll be featuring spooky blog posts every…