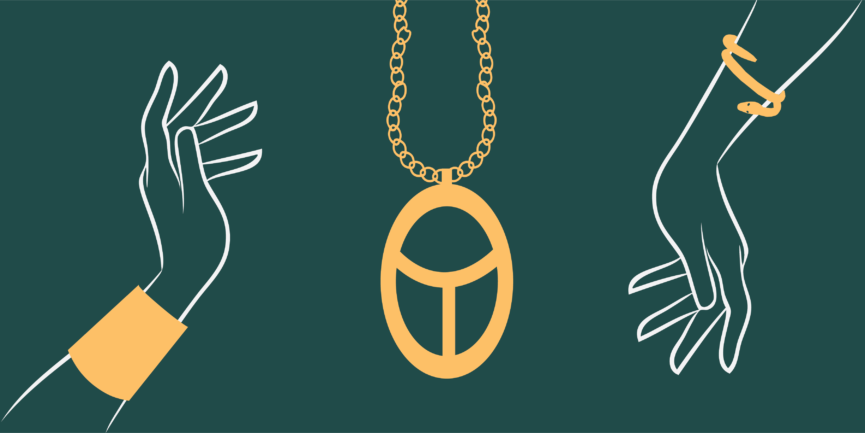 Jewelry was an integral part of Ancient Egyptian culture. Gold and stone pieces were given as gifts, exchanged, and buried in the elaborate tombs discovered by archeologists and written about by historians. The Ancient Egyptians paved the way for master jewelry craftsmen through the centuries, and utilized distinctive styles that continue to influence jewelry design today.

Why Jewelry Was An Important Facet In Ancient Egyptian Culture

Almost every Ancient Egyptian—young, old, rich, poor, male, female, and everyone in between—wore jewelry of some kind. No #OOTD was complete without a bangle, a necklace, a handful of rings, or all of the above. More was definitely more when it came to adornment. This is just one of the reasons Ancient Egyptian jewelry is still considered some of the most beautiful jewelry in the world to this day. Why was jewelry such an important part of Egyptian culture?

Jewelry was often worn as protection since it was thought to ward off sickness and danger. Babies were frequently adorned with pendants to keep them free from disease since infant mortality was a harsh reality at the time.

Jewelry and amulets were also included throughout various areas in Ancient Egyptian burial tombs so their protection could continue in death. Mummies were often buried with heart scarabs—chiseled gemstones in the shape of scarab beetles placed over the heart—to promote rebirth. Intricate jewelry collars were sometimes wrapped between layers of fabric during mummification; some pharaohs were buried with up to a dozen collars.

They utilized the most precious and expensive materials for these pieces. Shining gold, silver, and precious gemstones were staples in any jewelry design worn by the wealthy. It’s rumored that Cleopatra’s favorite stone was the peridot, but many other gems appear in Ancient Egyptian jewelry as well.

Ancient Egyptians also wore jewelry to tell the stories of their people and past. They utilized motifs to symbolize religious beliefs, culture, and lore. For example, the scarab beetle told the tale of life after death and rebirth in the afterlife. The lotus flower represented the rising sun and the new life that comes with each new day.

Jewelry was also used to depict the success of an individual pharaoh and to distinguish between different rulers. By investigating the materials used in Ancient Egyptian jewelry, we can mark the passing of troubled times and abundant eras throughout history.

The Ancient Egyptians were some of the first people to utilize precious metals for jewelry. Many of the metalwork and goldsmithing techniques that have become staples in modern jewelry design trace their origins back to Egyptian craftsmen.

Egyptian relics made from gold have been discovered dating back as early as 3000 BC, when metal workers shaped raw gold into wire, foil, and enormous sheets they could utilize in their designs.

Gold rings, pendants, and other intricate designs were made using wax casting, a process that involves pouring molten metal into a pre-carved wax mold. Artisans across the globe still use a modern-day take on this process today.

Modern society has long questioned whether gold or silver jewelry is more appealing, but the Ancient Egyptians revered silver over gold. Why? Because they weren’t able to get silver as easily. It wasn’t available in nearby mines, so Ancient Egyptians could only acquire silver for their collections through trade during times of prosperity.

Lapis is another material that Ancient Egyptians cherished but couldn’t source locally. There’s still some debate about where Ancient Egyptians obtained it; some claim there were lapis mines in Egypt, but none have been found. Others debate which neighboring or far-off nations could have brought the blue stone to Egypt via trade routes. But one thing is for certain, Ancient Egyptians treasured the material.

Lapis was often referred to as the royal stone, both because it was so highly valued and because many royals favored it for their personal jewelry. Its rich blue color stands in stark contrast to shining gold and neutral desert tones. It was also believed to have magical properties; thanks to shimmering gold specks throughout the stone, lapis represents the heavens and the stars in the sky.

While Ancient Egyptians utilized precious metals and gemstones whenever possible, they also revered a composite material called faience. Faience was made by mixing natural materials like sand, quartz, salt, limestone, and minerals to create a ceramic substance that could be shaped, fired, coated, and colored with a blue glaze.

The end result was a stunning surface that shimmered under the bright Egyptian sun. Because of its sparkle, ancient Egyptians believed faience had magical properties, and they valued it highly. The faience technique was used in jewelry, sculpture, and architecture.

There’s no questioning influence of Ancient Egyptian designs throughout history. Through its distinctive style, Ancient Egyptian jewelry opened the door to metalwork, creativity, and excessive adornment. Here are some of the accessories that were popular among Ancient Egyptians:

Ancient Egyptians frequently wore gemstone belts to adorn simple linen garments. Even people who were less wealthy wore them because stones were far more accessible than precious metals. These belts utilized accessible materials like gemstones, rocks, crystals, shells, and glass. The next time you add a boho beaded belt to your outfit, thank the Ancient Egyptians for starting that trend thousands of years ago!

You’ve no doubt seen images featuring Ancient Egyptian pharaohs wearing thick cuffs and armlets. In fact, you can view some at the Grand Egyptian Museum in Cairo today. Bracelets, cuffs, and armlets were almost always worn in matching pairs by people of all genders. They were made from hammered gold sheets, and though they were rigid they were engineered with a hinge so they could be put on and taken off.

Amulets, not to be confused with armlets, are tiny carved charms that Ancient Egyptians carried at all times. These charms either had a loop in the back or were pierced with a hole so they could be threaded and worn on the body. They were frequently shaped from gemstones and were often tied around the neck, wrist, finger, or ankle. While they may not have taken the form of a typical piece of jewelry, amulets were often worn in a similar fashion to keep their protective powers close.

Before there were butterfly clips and rhinestones, Ancient Egyptians invented the art of hair decoration by creating jewelry just for their wigs. For the sake of good hygiene, royals often shaved their heads and styled their wigs as hair, sparing no expense when decorating these elaborate headpieces. Gold and glass pieces, gemstones, and beads were used to add glamour to already luxurious wigs.

Museums around the world showcase Ancient Egyptian Jewelry in their exhibits. Some particularly renowned collections include, of course, the Grand Museum of Egypt, The Metropolitan Museum of Art in New York, and The Australian Museum in Sydney.

While you can’t easily purchase authentic Egyptian Jewelry relics, there are several manufacturers that make Egyptian Jewelry replicas for purchase today. Additionally, museums often feature artisan-made replicas of Ancient Egyptian jewelry in their shops. So if you’re looking for a piece of history, you’re better off enjoying the style, design, and craftsmanship of a modern-day take on Ancient Egyptian design.

For more Jewelry history, check out this post on European jewelry throughout history.