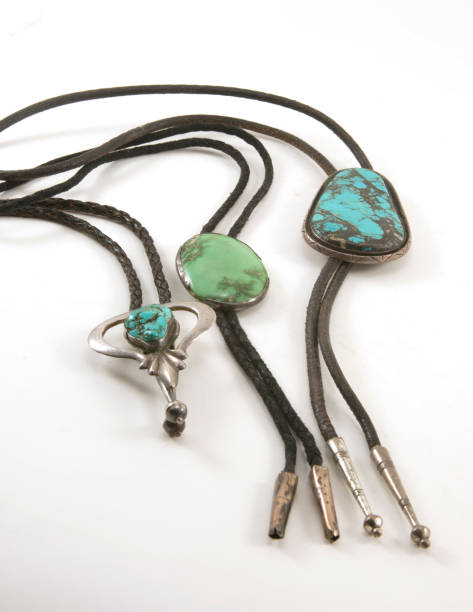 The bolo tie has become a trendy fashion item in recent years. It’s gone through multiple iterations as an expression of Western identity, a rockabilly staple, and even a high fashion accessory thanks to designer brands like Prada. But where did this versatile piece originate, and how can you make it your own?

What Is A Bolo Tie?

A bolo tie, sometimes called “bola tie” or “bootlace tie,” is equal parts necktie and necklace. It’s made of a piece of cord or braided leather which is cinched to the desired length by a decorative clasp called a slide. The tips of the bolo tie are usually capped with metal tips called aiguillettes. These three elements — the cord, the slide, and the aiguillettes — can all showcase the maker’s creativity and artistry, but the slide tends to grab the most attention. Slide designs commonly incorporate sterling silver, turquoise, and beautifully engraved patterns. 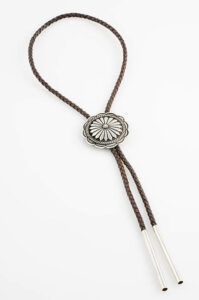 An example of a classic bolo tie.

Where Did Bolo Ties Come From?

A 2002 article in Sunset magazine tells this story about Arizona resident Victor Cedarstaff:

“… Cedarstaff was riding his horse one day in Wickenburg, AZ where he was a cowboy when his hat blew off. Wary of losing the silver-trimmed hatband, he slipped it around his neck. His companion joked, ‘That's a nice-looking tie you're wearing, Victor.’ An idea incubated, and Smith soon fashioned the first bola tie.”

Cedarstaff filed an official patent for the clasp of a bolo tie in 1954, and it has been a beloved fashion statement ever since. Bolo ties are strongly associated with the western United States, specifically the Native Americans, cowboys, and ranchers who called that region home in the mid-20th century when it was invented.

Is It Offensive To Wear A Bolo Tie?

This is a legitimate question, especially given society’s growing awareness of cultural appropriation. However, bolo ties are a recent invention that was personalized by people of various backgrounds right from the beginning. These accessories aren’t items of religious or spiritual significance to any particular culture, so you don’t run the risk of being disrespectful by wearing one.

With that said, many bolo ties use aesthetics and iconography that were pioneered by Native American artisans. If you’re interested in wearing this kind of bolo tie, it’s best to work with indigenous dealers and makers rather than those who are appropriating their designs for profit. 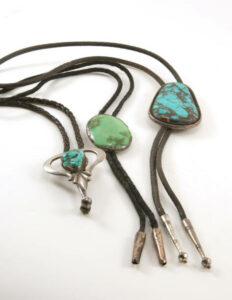 Turquoise is a popular stone in handcrafted bolo ties.

Where Do I Find A Bolo Tie?

You can find vintage bolo ties in secondhand venues like eBay, Etsy, and flea markets. Costs can range widely, from less than $50 to many thousands of dollars, depending on the piece’s age, condition, craftsmanship, and materials. If you find one you’re interested in while shopping online or in person, be sure to check any metal surfaces for stamps. This can help you identify the base material of the bolo tie’s slide, along with its age and original maker.

You’ll also want to test the stability of any stones on the slide; over time, the settings and prongs can be worn down, putting you at risk of losing the stone altogether. If anything seems loose, a professional can tighten the stones for you. Jewelry polishing is another great professional service that can help your vintage piece look shiny and new.

If you’re more interested in a new bolo tie, you can find them through any number of contemporary stores. Some bolo ties are custom-made, while others are mass-produced and, therefore, more affordable. There are even places where you can make your own bolo tie! Search in your local area for jewelry-making classes to see what options exist.

How Do I Wear A Bolo Tie?

Bolo ties are usually paired with collared shirts, similar to traditional neckties. The clasp can be worn over the top collar button, exactly where a necktie would be knotted, with the main neck loop hidden under the folded collar and the loose ends of the cord hanging down in front of the chest. However, if you’d like a different look, just think of your bolo tie as a necklace! You can try it with any style of shirt or jacket to see if you like the effect. 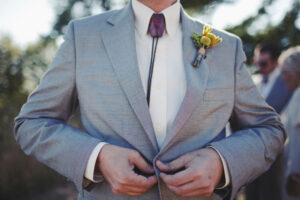 Pair a bolo tie with a suit for a look that's both modern and retro.

You can dress up a bolo tie to make it appropriate for events like weddings and professional meetings; in fact, in communities where bolo ties are worn most commonly, you’re more likely to see people wearing them on formal occasions than casual ones. In rural areas of the western US, men often wear bolo ties with suits and cowboy hats to funerals or other occasions where people want to look their best.

If you want to incorporate a bolo tie or two into your jewelry collection, you’ve got plenty of great options! Dress it up or dress it down, but make sure to keep it in peak condition. We can help with that — check out our menu of repair services to see which one your bolo tie needs! 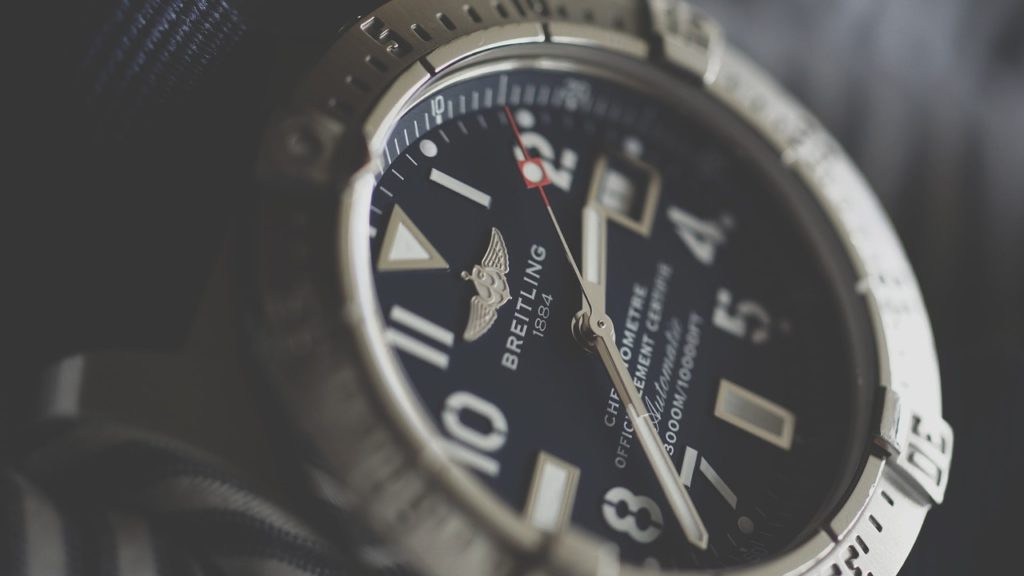 5 Affordable Luxury Watches That Are Calling Your Name 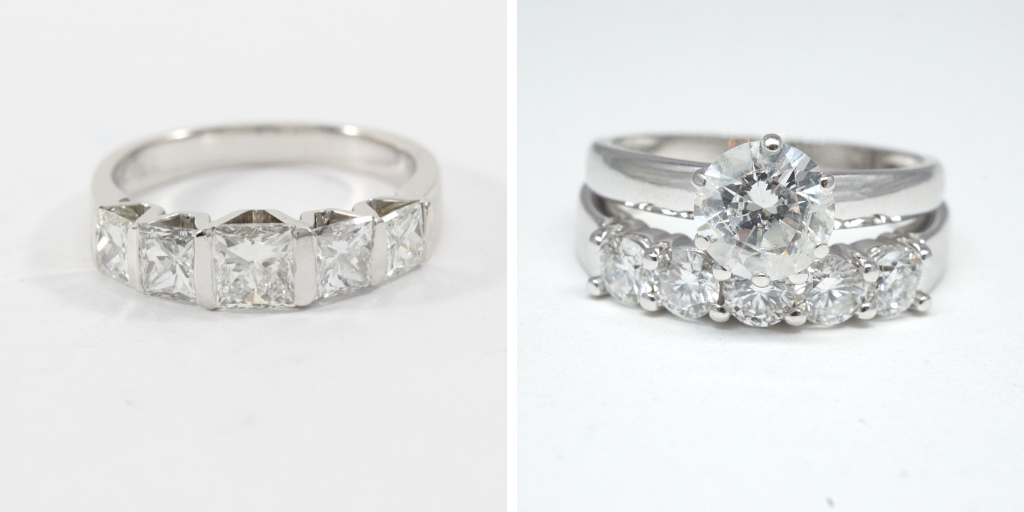 Platinum vs. White Gold: The Best Metal For Jewelry

You're debating between several options for your next jewelry purchase, and you just can't… 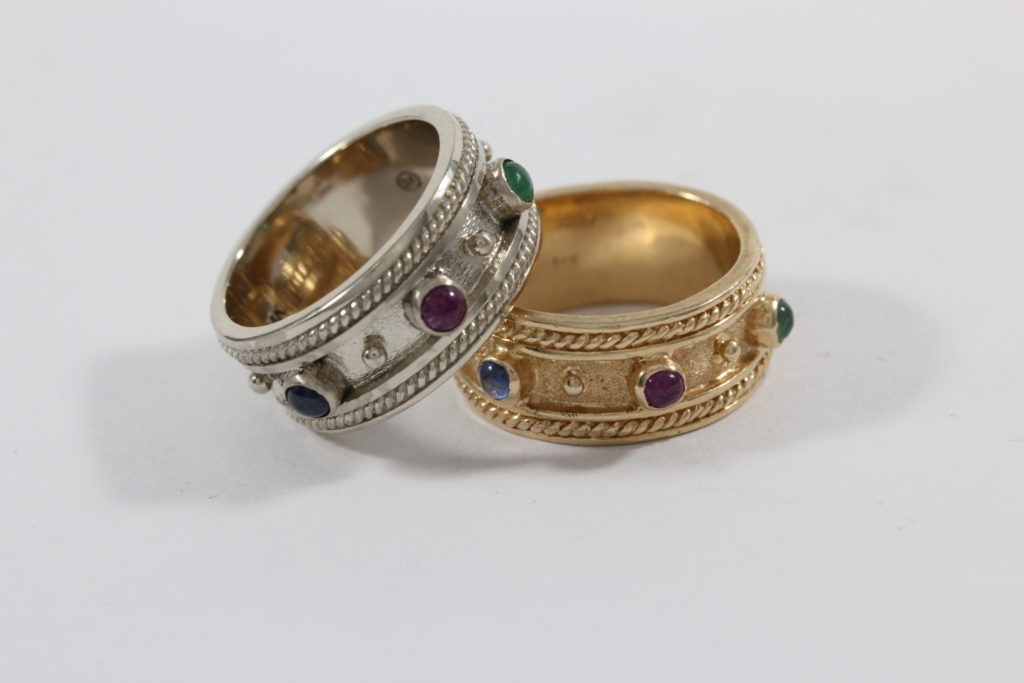