What Gems Should You Buy For Anniversary Jewelry?

1st anniversary: For the first year, anything in yellow gold is great! Yellow gold is traditional and beautiful, with a rich historical connotation. As gold is incorruptible, precious, and not prone to tarnishing like sterling silver, it’s like a promise that the relationship will continue in the same way. As an alternative, pearl jewelry is also a wonderfully symbolic gift. The pearl is a rare and precious gem that needs care and nurturing, much like a budding romance. 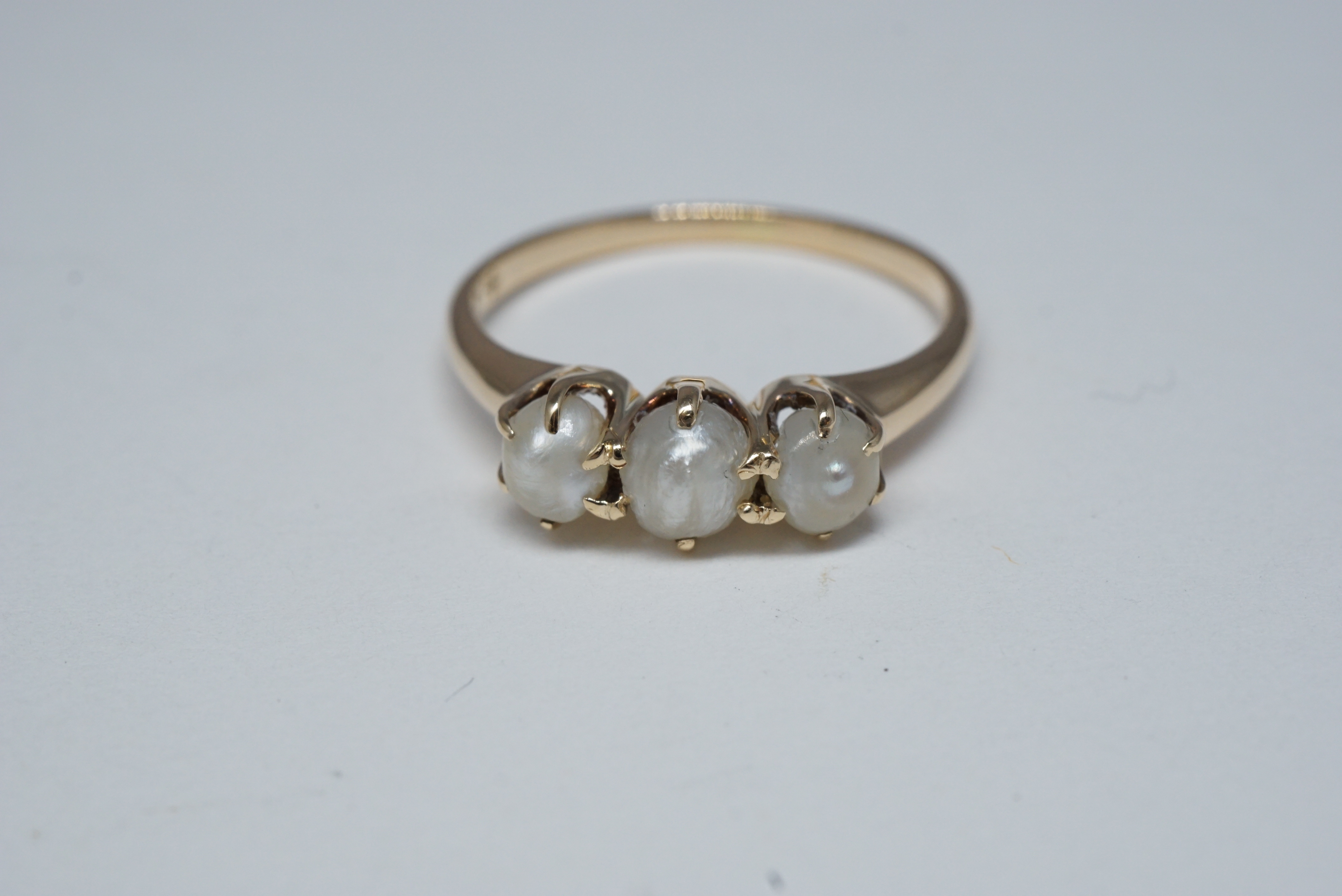 10th anniversary: For the tenth anniversary, it’s recommended to give diamonds. The diamond is the gem of love; its reputation for durability and endurance celebrates that you’ve made it to a decade with your beloved partner! We recommend a piece of anniversary jewelry that complements the existing engagement ring, such as a pair of earrings or a necklace. 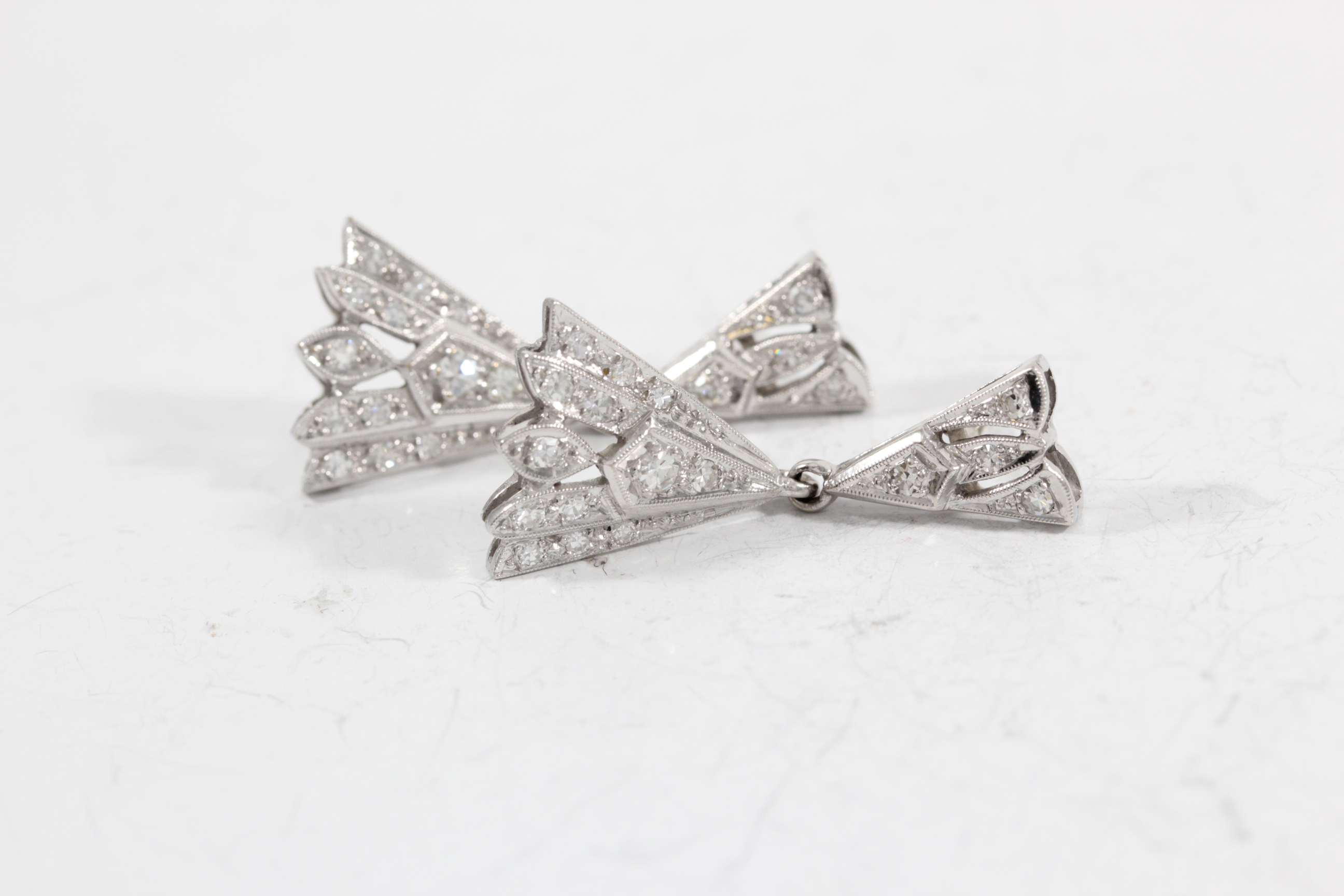 Antique white gold diamond earrings that we refurbished for a client.

15th anniversary: Ruby is the choice of gem for a 15th anniversary. Its red and pink hues evoke the feeling of romance, as well as wealth and success. A good quality ruby can be even more expensive than an average diamond in terms of color and clarity! Pair with gold for a traditional, romantic look, or with rose gold for an unconventional yet eye-catching warm combination.
If rubies aren’t your partner’s thing, consider a watch! This practical gift for a 15th anniversary can include bedazzled bezels for that extra gem-encrusted component. A beautiful timepiece in burnished gold or rose gold can be quite a statement. 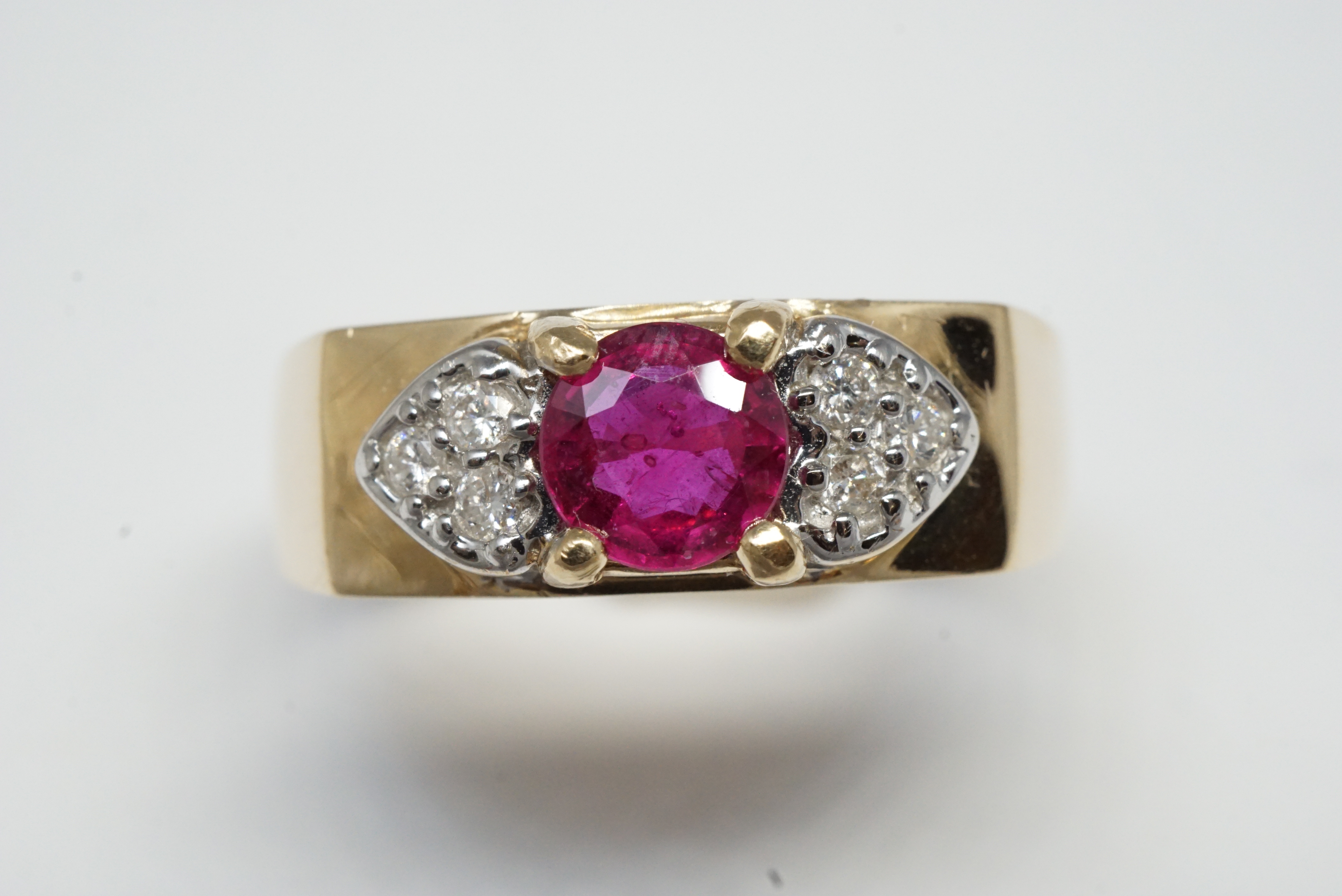 This close-up of a ruby ring shows all the internal inclusions and its bright color.

20th anniversary: After 2 decades, an emerald or piece of jewelry made from platinum is the appropriate gift. Emeralds have long known to be sought after by kings and queens- it has been the jewel of nobles since antiquity. Their vivid color soothes eye strain and tension, making it a wonderfully calming piece (and hopefully smooth over any marital arguments!)
Platinum is a precious metal even more expensive than gold. Its silvery luster doesn’t change color over time, unlike white gold, and its weight makes it appealing as well. A chain or a pair of earrings in platinum would make a lovely anniversary gift. While rings are also a viable option, keep in mind that platinum scratches easily and will show wear over time.

25th anniversary: Sterling silver anniversary jewelry is the choice for the 25th year! Many designer pieces (such as David Yurman and Tiffany & Co.) come in this precious yet relatively affordable metal. This is the time to get your partner something bold; since sterling silver is cheaper than gold, you can get a big statement piece! A large bib necklace or a chunky cuff bracelet would be attention grabbing and great to flaunt at brunch with friends.
Lots of colorful gemstones pair nicely with sterling silver as well, so consider jewels such as amethyst, peridot, citrine, or London blue topaz. 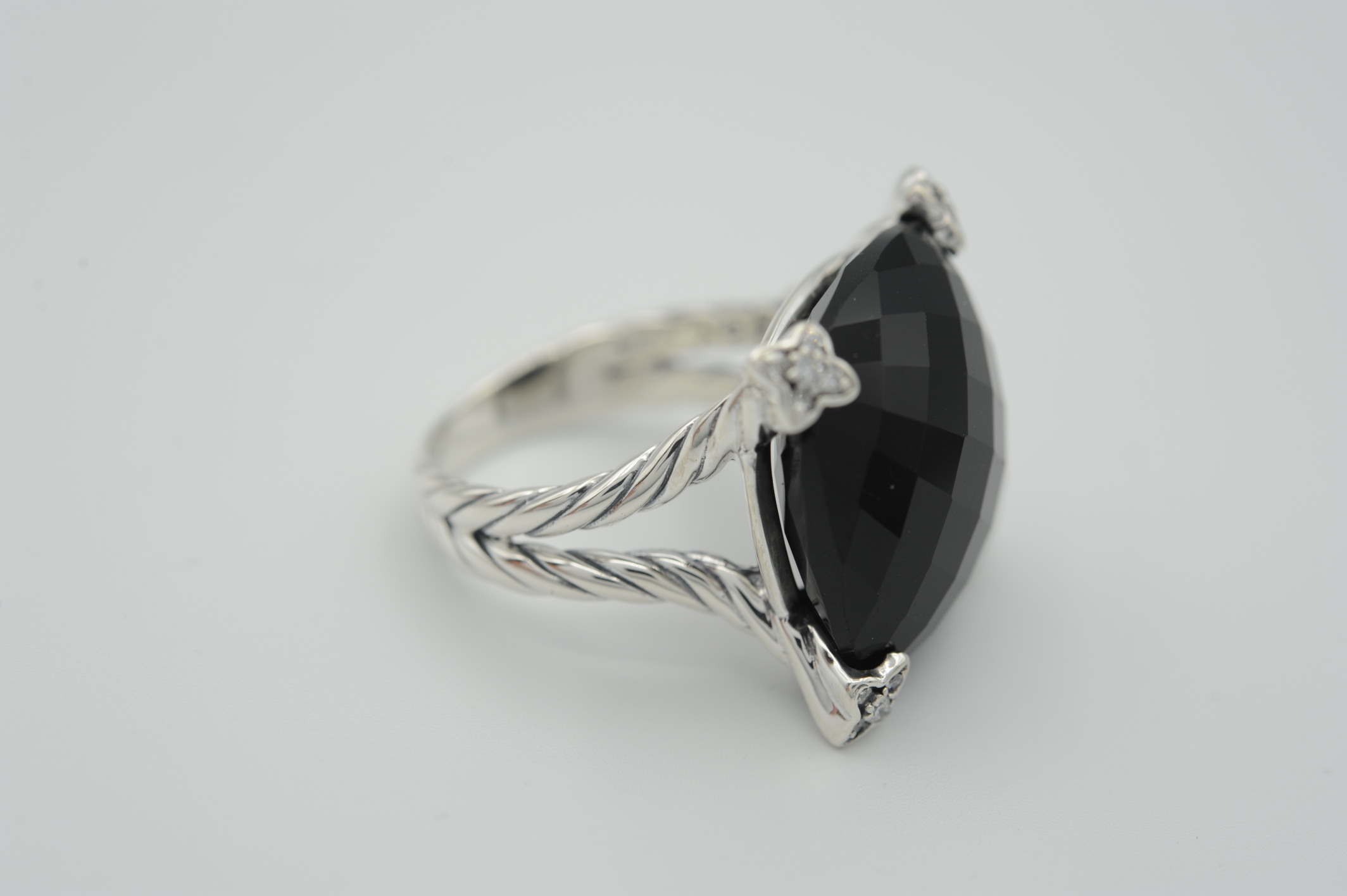 This ring is a sterling silver and onyx David Yurman piece. If made from white gold, the price would be comparatively greater.

30th anniversary: The Chinese and Mesoamerican cultures prized jade as a sacred stone. With its opaque yet attractive demeanor, it’s no wonder they carved statues and religious totems out of it! Jade is the chosen jewel for a 30th anniversary, and with centuries of historical importance, it’s a stone with significant symbolism. If your partner likes bracelets, consider a carved bangle fitted exactly to their wrist! A pendant or bold cocktail ring would also make a wonderful present.

This cool jade ring belonged to a client and needed a resizing down.

With this guidance, you shouldn’t be stumped any more on what to get your partner for that upcoming anniversary! Share your thoughts with us below in the comments. 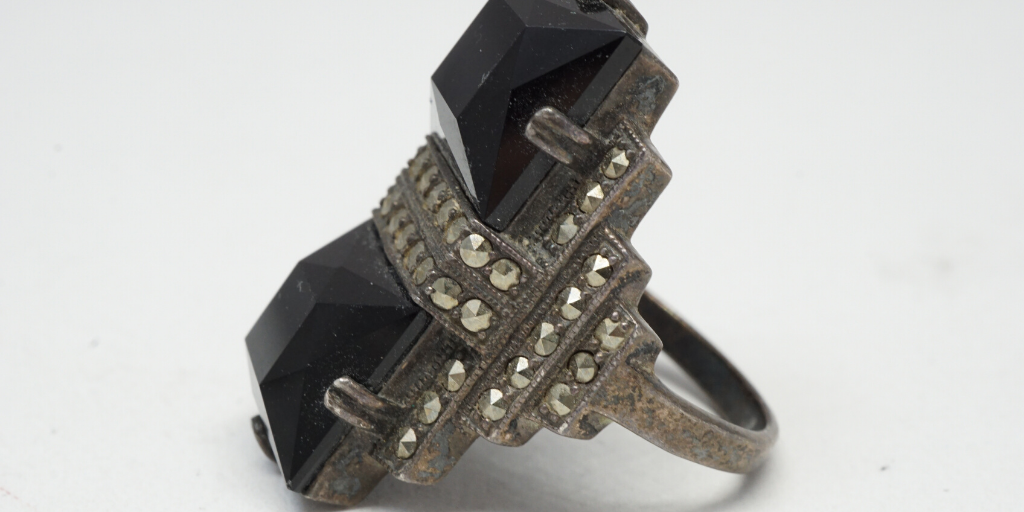 How To Clean Sterling Silver

Sterling silver is a great metal; after all, it’s affordable, easy to work with,… 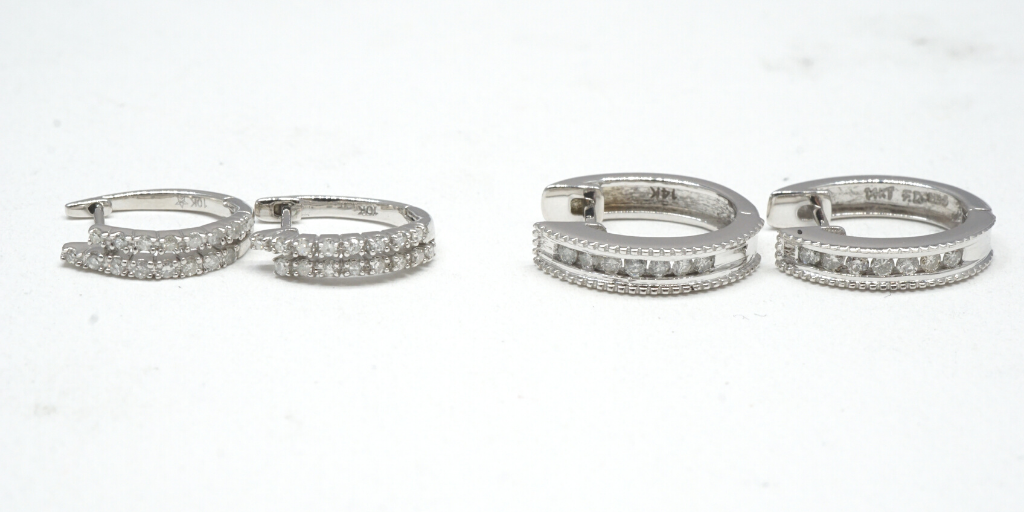 5 Hoop Earring Styles To Consider For 2020

Looking to loop into the hoop craze this year? From cute and subtle huggies… 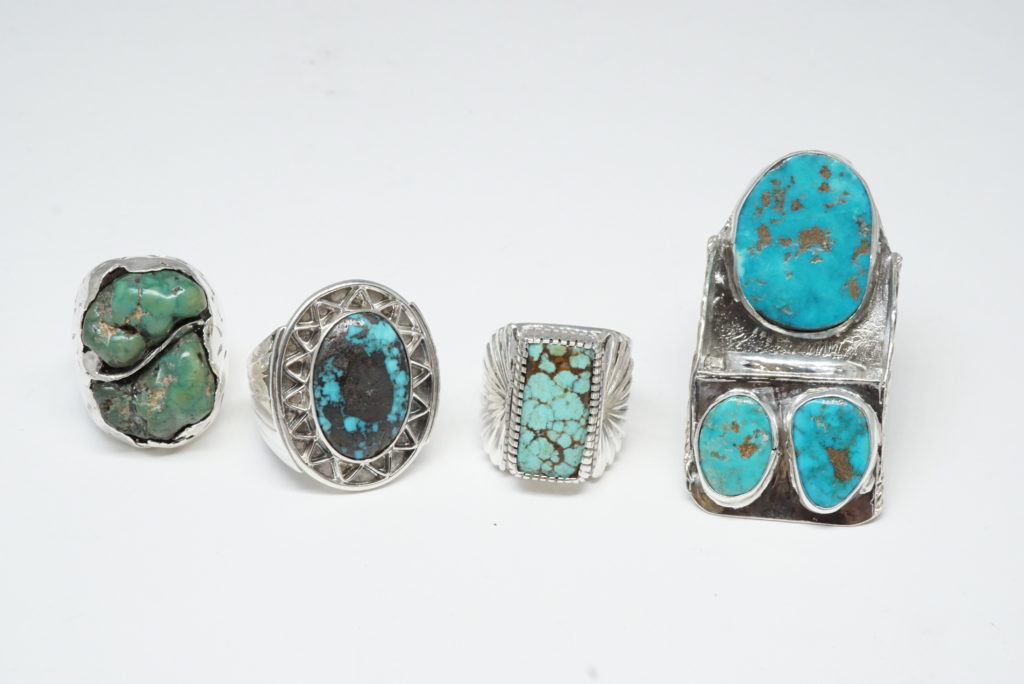 How to Appraise Jewelry Yourself at Home

You’re sitting around at home, wondering what to do with some pieces of jewelry…